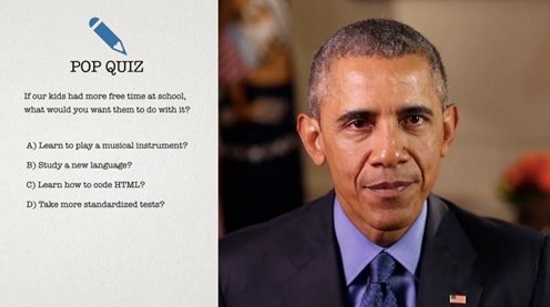 After years of complaints from teachers, parents and students alike, the Obama administration on Saturday announced new guidelines toward standardized tests, saying kids spend too much time taking “unnecessary” exams in schools.

In a Facebook video message, President Barack Obama said he hears from parents who worry about “too much testing, and from teachers who feel so much pressure to teach to a test that it takes the joy out of teaching and learning.”

“I want to fix thatObama said the new guidelines call for taking only the “tests that are worth taking”– that are “high quality, aimed at good instruction” and that ensure students are “on track.”,” he said.

The Department of Education said “the Administration bears some of the responsibility for” the issue, releasing a “Testing Action Plan” outlining new principles for measuring student aptitude. The plan says current policies have led to “unnecessary testing” with “not enough clarity of purpose.”

The guidelines are recommendations for school districts to follow but are not binding regulations.

The administration isn’t citing specific tests that should be continued or scrapped, leaving that decision up to the particular districts as testing differs from state to state. The guidelines don’t replace those that are part of No Child Left Behind, but if Congress were to alter that law and include the Obama administration’s recommendations, districts would then be required to follow them.

Additional details will be released in January, the White House told CNN.

The administration gives general ways to assess each of those qualities. The plan recommends that students spend no more than 2% of classroom time taking these tests, and that parents be notified if their child’s school exceeds this limit.

Testing shouldn’t “crowd out teaching and learning” and should just be one of many tools to measure how students and schools are performing, Obama said.

On Monday, Obama will meet with teachers and representatives of states and school districts to discuss the issue. Secretary of Education Arne Duncan and his deputy, John King, are expected to attend.

The Washington-based Council of Great City Schools said in a report issued Saturday that “there is no correlation between mandated testing time and reading math scores on the National Assessment of Educational Progress.”

“In other words,” the release said, “there’s no evidence that adding test time improves academic performance.”

“It’s a big deal that the president and the secretaries of education-both current and future-are saying that they get it and are pledging to address the fixation on testing in tangible ways,” Weingarten said.

“the devil is in the details.”

“I embrace the principles laid out today by the Obama Administration because they move us in the right direction,” her campaign said in a statement. “Standardized tests must be worth taking, high quality, time-limited, fair, fully transparent to students and parents, just one of multiple measures, and tied to improving learning.”